Ammonium nitrate is a solid crystalline substance, soluble in water. It is industrially produced using ammonia and nitric acid. Its main commercial use is as a fertilizer with high nitrogen content.

It is also used as an explosive of special applications, mixed with oil or other combustible substances (Ammonium Nitrate Fuel Oil - ANFO).

The most important, in terms of hazard, charactristic is the classification as oxidizing (H272- Oxidizing solid category 3, according to Regulation 1272/2008 CLP). Therefore it can contribute to the ignition and maintenance of a fire, in the absence of air.

Due to this specific property and the accidents that have occurred in installations with ammonium nitrate, it is a substance that is subject to the provisions of Dir. 2012/18/EU (SEVESO III directive) which refers to the measures, conditions and infrastrucutre of industrial and storage sites that manage hazardous substances that may lead to large-scale industrial accidents.

When nitrogen fertilizers are exposed to high temperatures (eg during a fire) a decomposition process may begin which releases toxic gases (nitrous oxide, nitrogen oxides, ammonia) and heat. The probability of occurrence of the phenomenon and the speed of decomposition depend on:

Any gas released in the event of a fire in a fertilizers production or storage area, should be treated as toxic and should therefore be approached using a respirator (SCBA) with a face mask under positive pressure. The same applies even if there is smoke with no visible fire, since a decomposition process may be evolving.

The most suitable and effective means of extinguishing a fire in which ammonium nitrate fertilizers are involved is water. Means that work by cutting off the air supply to the fire (eg foam, dust, sand) are not effective. In case of fire, or decomposition in a pile of bulk fertilizer, the use of metal, telescopic fire hoses (victor lances) that penetrate into the pile is particularly effective.

The risk of explosion in packaged ammonium nitrate fertilizers is very low if:

If the above measures are not observed properly, the risk of explosion is real and can be created:

♦ Dense white and / or orange-yellow smoke is an indication that only a process of self-sustaining decomposition is taking place, without or with limited fuel involvement.

♦ Dense black smoke from fertilizer storage is an indication that significant amounts of combustible materials are involved in the fire and the risk of explosion is increased. 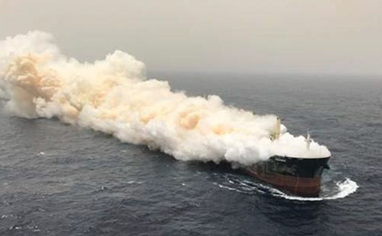 Smoke from decomposition of NPK fertilizers in a bulk carrier

♦ Yes, if it is a self-sustaining decomposition (white, and / or orange-yellow smoke)

♦ Yes, since it is a fire that involves combustible materials, but has not passed into a phase of under-ventilation

♦ No, if prolonged stage of under-ventilation has occured

Medium and large facilities for the production and storage of ammonium nitrate fertilizers in Europe are subject to the provisions of Dir. 2012/18/EU (SEVESO III directive). This results in relatively frequent inspections by the authorites involved and, in general, a satisfactory level of awareness and compliance with the rules of good industrial and storage practices, combined with the existence of the necessary technical means (fire detection, fire safety).

The level of risk is increased in small installations where the stored quantities are below the application limits of Dir. 2012/18/EU. In several of these facilities, a lack of knowledge of the dangers and the absence of adequaete means of firefighting and fire detection has been observed. The risk increases dramatically when co-storage takes place with other agrochemical products (pesticides, insecticides, etc.) most of which are flammable, as is the case with many small warehouses for agricultural supplies.

See the most important accidents and incidents with ammonium nitrate