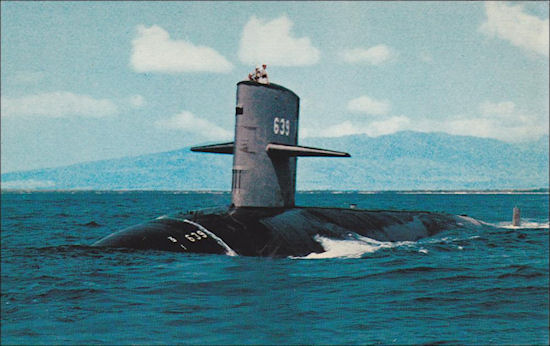 It seems like only yesterday that American battleships were declared obsolete (though some still exist) because they were sitting ducks, required too much personnel, and their shells were unguided.

As well, aircraft carriers suffer from the first two shortcomings. The consensus was that the future of sea warfare was submarines with their stealth, mobility, and guided missiles.

Now, submarines, writes Harry Kazianis at the National Interest, may be destined for the same fate. How could that happen so fast?

If advances in big data and new detection methods fuse with the anti-access/area denial (A2/AD) ambitions of nations like China and Russia, naval planners around the world might have to go back to the drawing board.

Kazianis cites a report by the Center for Strategic and Budgetary Assessments. It author, Bryan Clark, writes Kazianis, also authored a piece for the National Interest, in which he wrote:

Since the Cold War submarines, particularly quiet American ones, have been considered largely immune to adversary A2/AD capabilities. But the ability of submarines to hide through quieting alone will decrease as each successive decibel of noise reduction becomes more expensive and as new detection methods mature that rely on phenomena other than sounds emanating from a submarine.

Notre: A2/AD is anti-access/area denial, which is just what it sounds like: blocking or impeding the progress of a perceived foe, such as, in China's case, US warships.

So what can Washington do to mitigate the problem? While presenting a number of solutions, one alluded to by CSBA's Clark seems quite genius: essentially turning submarines into underwater aircraft carriers that would carry drone-like underwater unmanned vehicles or UUVs.

Great: drones from under the sea as well as from the sky.

When I was younger I used to wonder how pilots, and naval commanders and personnel, could wage war in the air or sea without being distracted by the natural beauty surrounding them. Alas, that's lost for the most part on military types.

One can only long for the day when the absurdity of fighting in such spiritually uplifting settings as the sea finally rises to the surface of our consciousnesses.

Biden Is Right to End the War in Afghanistan

The Delta Variant of Global Stupidity

Does the Future Belong to the Taliban?

In a Dangerous Time: Toward Preventing a Disastrous U.S.-China War