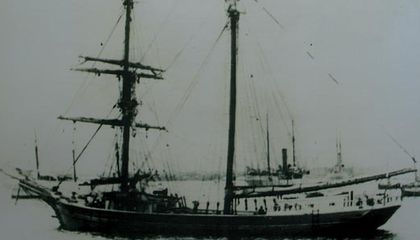 The name Mary Celeste refers to one of the greatest sea mysteries, that still remains unanswered, almost 150 years later.

19th-century sailors used the term "ghosts" for those ships that sailed without a crew, unmanned, in the oceans. The reasons for their abandonment were sometimes quite simple (piracy, natural phenomena) and sometimes more foggy. Every captain who encountered a ghost ship had the obligation to try to tow it to port, as it was a serious danger to navigation. That's how Mary Celeste's story begins.

Mary Celeste was a 280tn brig that sailed from New York on November 7, 1872. Its destination was Genoa and its cargo was about 1,700 barrels of alcohol. The captain, Benjamin Briggs, his wife, their two-year-old daughter and seven crew members were aboard the ship.

On December 5 (according to others on December 4), about halfway between the Azores and Gibraltar (about 600 miles west of Gibraltar), the English merchant vessel Dei Gratia spotted an unknown ship that appeared to be sailing randomly. Dei Gratia watched the unknown ship for about 2 hours, while approaching it. The visual observation showed that no one was on the deck, while the ship that had now been identified as Mary Celeste did not respond to any visual communication.

The Captain of Dei Gratia ordered his first mate and two sailors to board Mary Celeste. The boarding confirmed that the ship was abandoned. According to the most recited version of the story, the only living creature aboard Mary Celeste was a cat. On the deck there were wet clothes that had been spread out to dry, while in the mess (dining room) there were 4 empty plates and 4 cups of tea that were steaming. The ship's food was simmering in the ship's galley. Also on one end of the deck there were blood stains and a sword, also with blood. The ship was missing its navigation instruments and charts, except for the ship’s log. The last entry in the log was on November 24 and there were no strange or unexplained notes. Mary Celeste's overall state was described as very good, all the sails were tied and the two boats of the ship were in place. Mary Celeste sailed to Gibraltar on December 24, manned by  Dei Gratia’s first mate and 2 sailors of. The mystery of Mary Celeste had just been born.
The story of the ghost ship was published in many newspapers of the time, both in America and in Europe. In the years that followed, and to this day, it has been the subject of articles, novels, scientific and semi-scientific books and writings. There are many explanations given from time to time: sea monsters, pirates, crew rebellion, attack by Dei Gratia crew, space-time wormholes, UFOs and other extraterrestrial connections, while reference to Mary Celeste is also made in Charles Berlitz's notorious book “The Bermuda Triangle".

Time and the reproduction of the story created the myth surrounding the case of Mary Celeste. The variations that appear in the references in Mary Celeste are essentially shaped by the theory that the writer/narrator supports. Many of the story details, as mentioned above, date back to Sir Arthur Arthur Conan Doyle's short story "Marie Celeste" published in 1884. However, they were adopted as the true version. The most authoritative version of the story, is derived from the report on the incident by the Gibraltar Inquiry Board, and is in fact quite different.

When the Dei Gratia crew members boarded Mary Celeste, the sails were not tied, but raised. Behind the ship hung a thick 100 meters long rope, most likely to tow a boat. The ship's only boat was missing. The forward compartments had put about 30 inches of water from the deck's hatches which were open. Most of the other apartments were flooded, including the crew's accommodation. Of the ship's two pumps, one was damaged and the other was in perfect condition, and was used by Dei Gratia sailors on the voyage to Gibraltar. The cargo was well fastened and stable. Finally, the ship's navigation instruments and charts were indeed missing, except for the log..

No cat or other living creature was on board, while in the galley and the crew mess everything was upside down and of course there were no cups of hot tea or food. There were no bloodstains anywhere and the only sword found on the ship was rusting in its case. These clarifications, although they provide no obvious answer as  to what happened to Mary Celeste, certainly take away much of the mystery and can lead to some reasonable assumptions.

The result of the inquiry is summed up in the assessment that for some unknown reason the crew abandoned Mary Celeste, using the lifeboat. The result shows that the reason that led to this abandonment was not properly assessed, as the ship remained seaworthy, while the crew was lost. Dei Gratia was awarded the legal reward for finding and towing the ship and the cargo to port, while Mary Celeste continued her journey to Genoa with a new crew recruited by the ship-owner. It is worth noting that the focus of the inquiry was mainly the determination of the rights on the ship and its cargo and the judgment on the insurance claims. The causes of the crew's disappearance were only of interest to the extent that they were related to these issues.

What was the fate of Mary Celeste's crew? To date, almost 150 years later, it has not been possible to give a completely satisfying answer. The most probable explanation is that they abbandonded the ship. This is supported by:

Most likely the crew boarded the life boat, tied to the stern of the ship and was being towed at a distance of about 100 meters. At some point, probably due to bad weather, the rope broke and the boat went missing in the ocean, while the ship continued its voyage, based on the configuration of the sails. Obviously the question remains: what was the reason that forced the crew to board the life boat and remain towed behind the ship? Based on the available data, the only explanation that can be given is a misconception about the water level in the ship's hold (damaged pump). Another explanation given is a series of events that frightened the ship's crew, because of the highly flammable cargo, and led to the abandonment of the ship.

A theory that has been supported for several years is that Dei Gratia's role was actually much more sinister. That is, when Dei Gratia met Mary Celeste, the latter's crew were alive and on board. But the captain of Dei Gratia decided to kill them and then present Mary Celeste as salvaged in order to collect the reward. Another version of the same theory considers a planned piracy. Members of the Dei Gratia crew sailed with Mary Celeste as crew supplements and after killing the others they executed a preplanned rendezvous with Dei Gratia in the middle of the ocean. It is true that Mary Celeste and Dei Gratia were tied alongside in the port of New York before embarking on the transatlantic voyage with a difference of 8 days (Mary Celeste departing first). So the coincidence that they met again in the middle of the ocean a few days later gave rise to several suspicions. However, there has never been enough evidence to support this hypothesis.

The most popular explanations have been and remain those that invoke some form of unknown force. At the end of the 19th century these stories involved sea monsters, later they evolved to space-time wormholes and by the end of the 20th century to alien abductions.

Only the sea knows the answer to Mary Celeste's enigma and will never disclose it. But when people are looking for the true story, it is probably better to consider the difficulties and the dangers of sea faring in the 19th century, along with the sailors’ personal anxieties and fears, than mysterious supernatural forces and aliens.