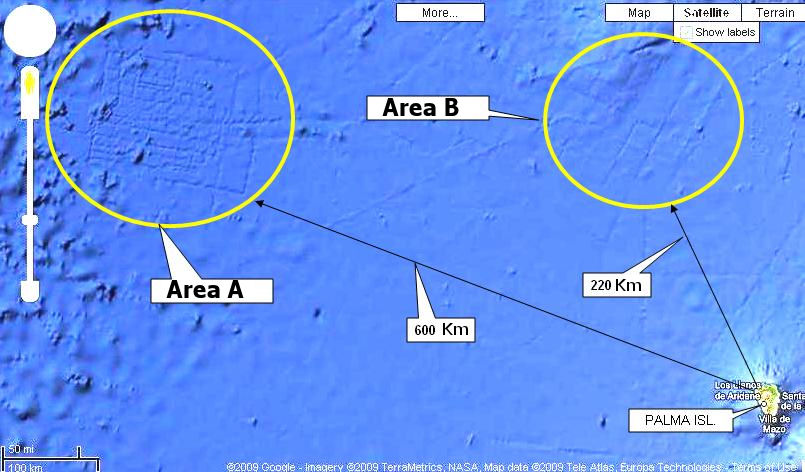 A Google representative claimed that what the users of the program see is the result of the scanning of the bottom by the sonar (sound radar) of ships that cross the oceans. These lines, according to the Google representative, are nothing more than a relief depiction of the course of a ship.

But we are not only talking about a straight line, but literally about a grid, which is strongly reminiscent of the blueprint plan of a giant city.

Atlantis, of course, existed and was where Plato places it in Timaeus. Atlantis was located right in the mid-ocean ridge of the Atlantic, at the point where the African / Eurasian is moving away from the corresponding North / South American plate. As is well known, due to the distance between the plates, the Atlantic Ocean grows 2 cm each year. The Azores and the Antilles may be remnants of Atlantis (mountain peaks that remained or even new islands that emerged). According to Plato's testimony, which is historical and recorded in Timaeus and Kritias, there are hundreds of traditions on the other side of the Atlantic. For all the peoples of both sides of the Atlantic there is the myth of Atlantis, which means that in the memory of ancient people the existence of the continent was abolished and that the myth - that is, oral history and tradition - was lost in the centuries.

Plato, mentions some amazing facts: The Athenian-Atlantic war in which the Athenians finally prevailed, but unfortunately this knowledge was lost. Who told this amazing story to Plato? Solon, one of the seven wise men όταν when he visited Egypt-saw ancient papyri that the priests showed him, the history of his homeland of Athens, and its omnipotence many centuries ago.

The Aztecs in their tradition considered themselves descendants of those who came from the disappeared island in the middle of the Atlantic. Their god was Kotzakoatl, where the ending was -atl (atlas).

Atlantis disappeared from the face of the earth when the Middle-Ocean ridge literally "opened" due to not, of course, any internal geological factor, but clearly due to some "external" factor.

Huge earthquakes of up to 9 magnitude shook Atlantis, while the violent removal of the lithospheric plates, sunk Atlantis to a depth of 5,000-6,000 meters. So Atlantis is there. It sleeps on the bottom of the Atlantic Ocean, naturally covered in sand, seaweed and coral. No one can find it anymore because at least 12,000 years have passed.

According to Plato, the Atlanteans worshiped the god Poseidon and took their name from his son, Atlas. This association leads me to the conclusion that the Atlanteans were probably settlers of the Athenians. We all remember the dispute between Athena and Poseidon over the name of Athens. Athena prevailed while Poseidon seems to have taken control of the Athenian colony in the Atlantic. On the other hand, why should Plato refer to Poseidon as the god of the Atlanteans? Why him and not some god e.g. of the Egyptians or the ancient Native Americans? Quite simply, because the Atlanteans were Greeks from Athens. So the Athenian-Atlantic war that was described to Solon by the Egyptian priests, was in fact a civil war between the metropolitan Athens and their colony in the Atlantic. Even the existence, until today, of the very Greek names Andros and Naxos of the Bahamas cannot be accidental. Definitely related to the respective Greek islands. And the correlation must be ancient.

So when did Atlantis flourish? Thira (Santorini) was destroyed around 1614 BC. according to newer calculations and has nothing to do with Atlantis.
I believe that there were chain reactions of earthquakes and giant tidal waves that destroyed not only Atlantis, but also much of coastal Greece and islands, so the knowledge of the advanced civlization of the Athenians at this time did not pass on to future generations. Simply because the co-flourishing Athenian civilization was destroyed at the same time as Atlantis and all that was left were some ancient manuscripts that survived in Egypt.

In Plato's Kritias he describes in detail the PEDIADA (plain) -as he calls it- of Atlantis, the ditches that the Atlanteans had dug and received the water from the surrounding mountains and used to irrigate their city but also transported tree trunks to use wood in various constructions. They also used these artificial "channels" to transport products by boat throughout the city. In fact, 2 of these ditches - as reported by Kritias - continued outside the city and discherged their water into the sea.

In the edited photo you can see the mountains west and north of the PEDIADA, the canal that transported the water from the mountains to the city system, and all the ditches-canals that cross the city. That PEDIADA is square (pay attention to the square with a side of 135 km) on the ancient shores of the sea and there is a semicircle like a port. These are visible, exactly as described by Kritias. 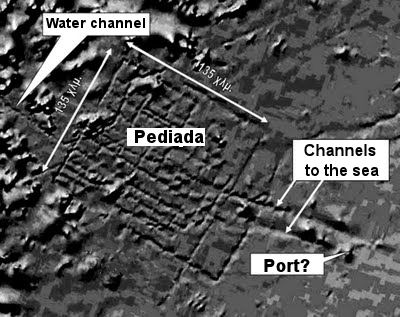 The ancient text of Kritias presents an incredibly detailed description, almost as if he took the Google photo and explained to us exactly what we see. And with accurate channel dimensions, lengths, back depths.

KRITIAS (Translation from the ancient text):

I will now describe the plain, as it was fashioned by nature and by the labours of many generations of kings through long ages. It was for the most part rectangular and oblong, and where falling out of the straight line followed the circular ditch. The depth, and width, and length of this ditch were incredible, and gave the impression that a work of such extent, in addition to so many others, could never have been artificial. Nevertheless I must say what I was told. It was excavated to the depth of a hundred, feet, and its breadth was a stadium everywhere; it was carried round the whole of the plain, and was ten thousand stadia in length. It received the streams which came down from the mountains, and winding round the plain and meeting at the city, was there let off into the sea. Further inland, likewise, straight canals of a hundred feet in width were cut from it through the plain, and again let off into the ditch leading to the sea: these canals were at intervals of a hundred stadia, and by them they brought down the wood from the mountains to the city, and conveyed the fruits of the earth in ships, cutting transverse passages from one canal into another, and to the city.

Sotiris Sofias was born in Corinth in 1961. He completed his basic education in his hometown in 1979. He continued his higher studies at NTUA, in the department of Surveying Engineers from where he graduated in 1985. He served his term in the Engineering Corps of the Greek Army as a reserve officer. His great love has always been painting, which he has been involved in since he was a child, having created more than 300 oil paintings. But the love of his life was and is Astronomy. Three telescopes have been used to explore the wonders of the sky, and countless astronomy books adorn its library. His restless nature has led him in recent years to the fascinating paths of search and exploration. However, he did not limit himself to the well-known paths of Science, but dared to explore the mysteries and "dark" points of established views. The result was to discover unknown information and reach very interesting conclusions that overturn the conventional view of our world ...