One of the most impressive things found in this period was the Astrolabe of Antikithyra. Some sponge collectors found it in 1901 near the Antikithyra island.

In the Greek research centre 'Demokritos' professor Derek de Solla Piere (from Yale university) and Har. Karakalos examined it with X-rays and found an amazingly complex construction. It is the most complex mechanical construction until 1200 A.D.!

The instrument fount at Antikithyra has a lot of metal wheels arranged in a way that simulates the movement of the stars and does the required calculations! Who designed it and who made it with such accuracy remains a mystery. But it is clear enough that is not an astrolabe but a kind of astrological calculator.

In the astrolabe there were 27 different circular gears that were connected all together and were put into movement by a hand shaft. Everything was inside a wooden box with possible dimensions of 35 x 17 x 10 cm. On the front face there were two disks with indications about the date of the month according the sun, and the date according the moon. On the back face there were two other disks, one showing the moon month and the other the moon eclipses.

Maybe these things seem simple but if you want to calculate them be prepared for calculations with six- decimal- digit accuracy!

Another technique appeared on the astrolabe for the first time in the history of engineering was the use of the differential gear. The rotation speed of the in shaft equals to the difference of the speed of the two output shafts. Nothing like that reappeared in any known machinery until 19th century!
The differential gear was used on that Astrolabe in order to allow the connection of sun to solar eclipses.

The astrolabe was probably first used by the ancient Greek astronomer Hipparchus.Hipparchus discovered the precession of the equinoxes. His calculation of the length of the year measured by the sun was within 6.5 minutes of modern measurements. Hipparchus devised a method of locating geographic positions by means of latitudes and longitudes. He catalogued, charted, and calculated the brightness of perhaps as many as 1000 stars. Hipparchus also compiled a table of trigonometric chords that became the basis for modern trigonometry.

Some people say that Archimedes has used some things like this, but a lot different from what it is found. 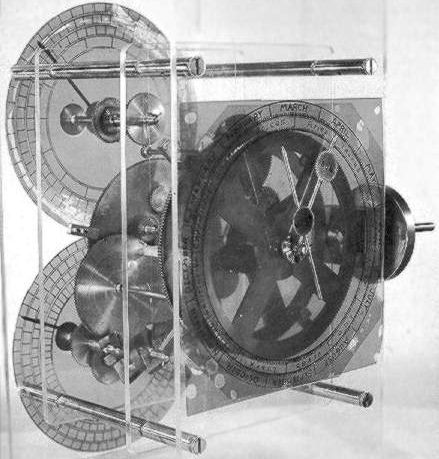